“I have heard this story too many times,” I think, as I listen to the grandmother in front of me. The stories all start with years of sickness and suffering. 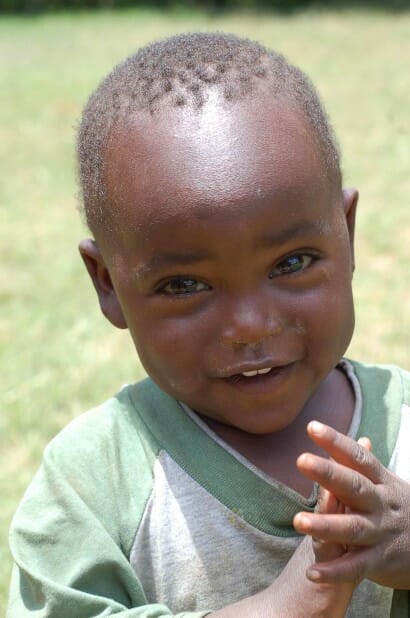 Rotich is 3 years old. His father died just months after he was born. His mother spent most of his first two years of life in and out of the hospital herself. She was sick over and over. No one knew exactly what was wrong with her, but when she died a year ago, the doctors told her own mother that it was HIV.

Rotich went to live with his grandmother after his mother had died. His grandmother barely scrapes together enough for the two of them to eat one meal a day, but she loves this little boy and so she keeps trying. She asks her neighbors for help, and she does her best to provide for him.

A few months ago, Rotich got sick with a bad, bad cough. He kept coughing and coughing. Not only was he struggling to breathe, but he was too weak to eat even that one meal a day. Finally, his grandmother got him to the hospital. At the hospital, they learned that Rotich has this HIV virus in his blood too.

Those were the bad times. Rotich’s grandmother thought she would lose this little boy as well.

“He was all that remained of my daughter,” she said. “And I did not want to lose him. But I knew he would die. Those who have HIV, they just die.”

Thankfully, Rotich’s grandmother was wrong. She kept trying, despite her fears. She managed to get him enrolled in an AMPATH clinic in a town within an hour’s trip of where they live. At the AMPATH clinic, Rotich was started on a combination of medicines that could fight back against this virus in his blood. I was out to prove Rotich’s grandmother wrong, too. I didn’t want to hear the sad ending to this story again. With these medicines, Rotich’s story transforms from death to life.

My study team started evaluating Rotich and his grandmother every month, going to their house and seeing them in clinic. During these evaluations, they make sure that he gets all four of his medicines, twice a day, every day. They helped arrange for him and his grandmother to get a small monthly supplement of food to help them get a second meal each day.

And now, we all get to bear witness to a miracle: this last remaining member of his family is thriving. He makes us laugh with how he clowns around in clinic.

This is the real story that I get to hear many times, for many children. From death to life. And even though it is a story we hear over and over, it is not really too many times. You can’t grow tired of the miracle.